How to check my game progress?

To check your game progress, simply tap the “log” button on the top menu bar and check the latest entry for your next destination.

In the log menu, you can also return to the previous plot point by tapping the “restore” button. This function can only be used inside starport. Although you can fight the previous story boss battles freely with the rollback function, these battles will not reward you special items if you have already fought them before. Unlike starting a “new game” in the title screen which removes your previous game record, using this function will not affect your possessions (e.g. ships, items, money and credits) of the current game.”

How to survive battles?

To increase your chance to survive battles:

2. Use Defense Matrix (DM) and Repair Ship. DM is a protective shield that blocks all incoming attack and it can get recharged when turned off. Repair Ship recovers your ship’s SP instantly during battles.

3. Add a wingman ship to your fleet which attacks your enemies and shares some damage for your flagship. Simply build a new ship in the shipyard and assign it the wingman ship in the “fleet” menu in a starport.

4. Use your most powerful ship as the flagship. You can change your flagship with the “swap” button in the “fleet” menu in a starport. Also see “how to build a new ship” for more information.”

How to avoid battle?

1. If you do not want to engage in battles with certain pirates, hold the “turbo” button at the lower right corner and enter the nearest starport or stargate quickly.

2. During battles, you can escape by clicking the “escape” button at the upper left corner and wait for 10 seconds.”

How to make money?

Tips on earning money in the game:

1. Rob the transport ships. They are weaker than other pirates.

2. Accept missions in the Information Center. You will be rewarded with money or equipment. Equipment earned in missions are often better than those found in the shops.

3. Pick the easier missions such as trailing (colored green in the missions menu) that do not involve battles.

4. If you have a transport ship, you can take the smuggling missions (colored purple) that require a large cargo hold.

5. Trade goods between different markets to profit from price differences. (See also “What is Golden Route?”)

How to build a new ship?

To build a ship:

1. Go to the shipyard and check what ships are available there. You can see what materials, blueprints, and how much money is required to build the ships there. 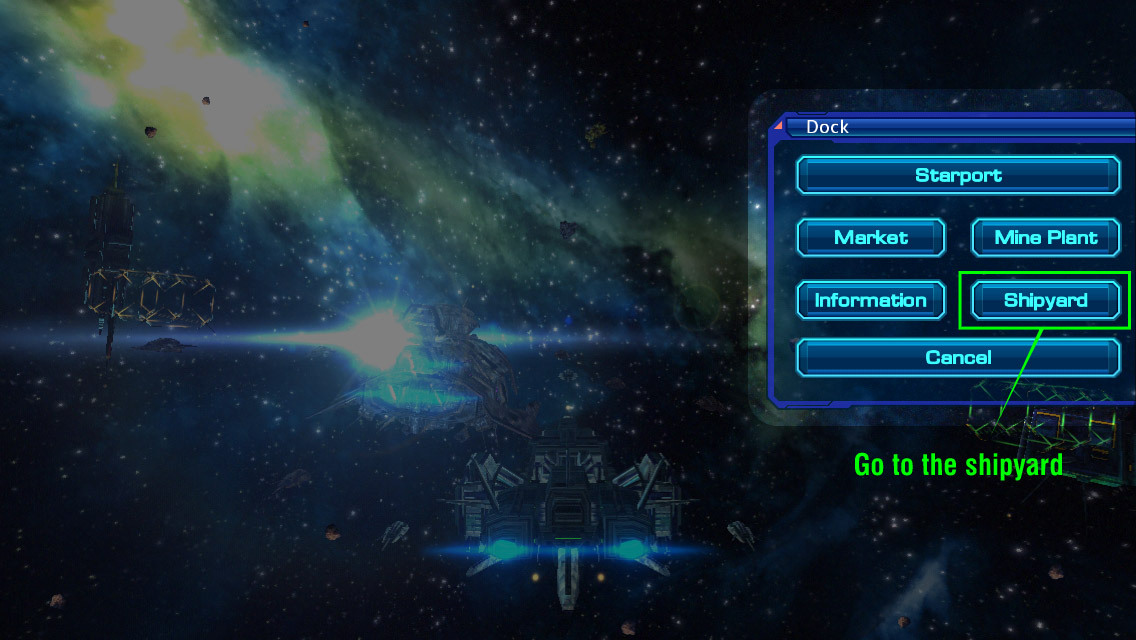 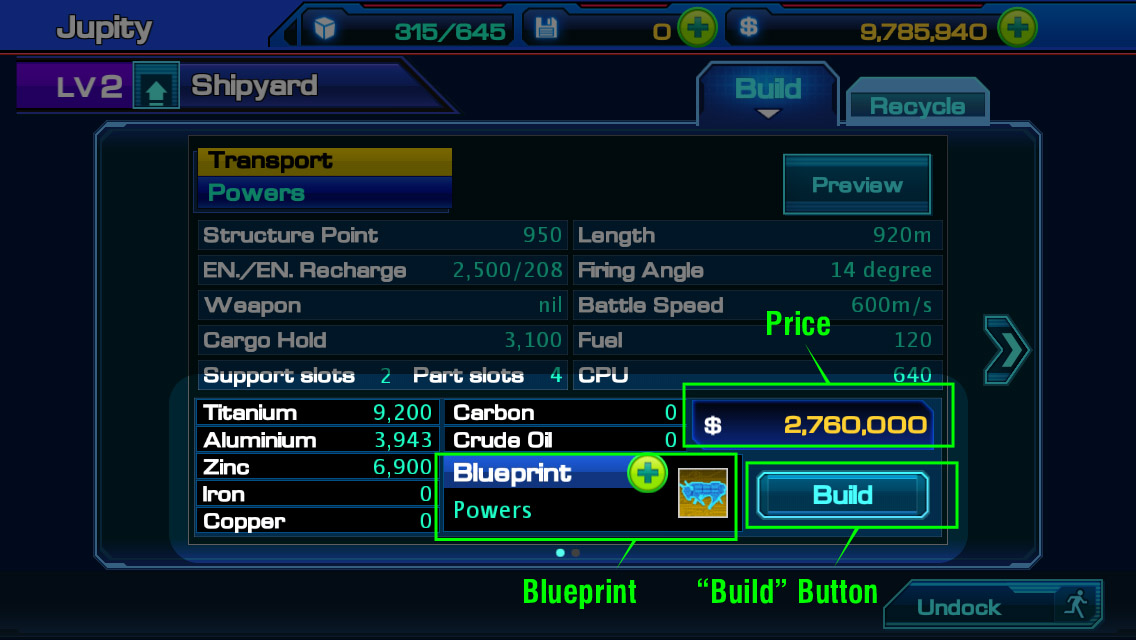 3. You can build more sophisticated ships by leveling up the shipyard. Simply tap the blue arrow icon next to the level of the shipyard UI and invest money to upgrade it. 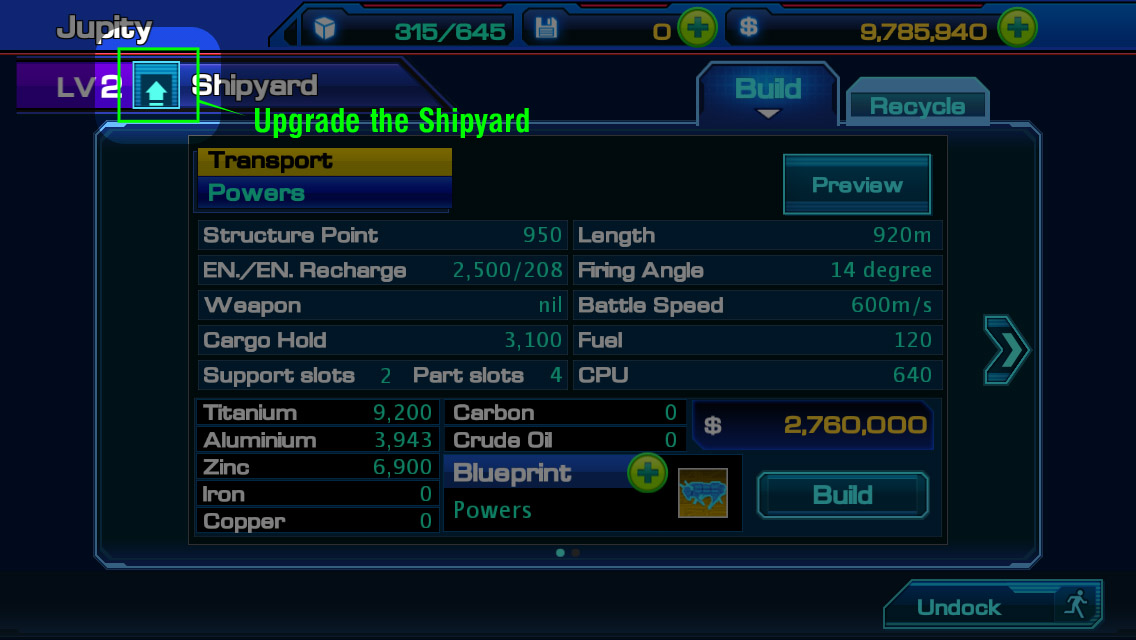 How to get blueprint?

You need a blueprint to build a new ship. Blueprints can be acquired in battles against pirate groups like the Blackbeard, Elhibor, Babyface Syndicate, Qayzan Fighters and Dralomee Defenders. The stronger the pirate fleet you encounter, the greater the chance you can obtain better blueprints. Besides robbing pirate fleets, you may also purchase blueprints in the blueprint store by credits.

How to get Materials?

Materials can be purchased from the mining plant of any starports.

What is Dock and Wander?

In the outer space, when you get close to a planet, there are two options: “Dock” and “Wander”.

1. Tap “Dock” to enter the starport directly for repairing and equipping your fleet.

2. Tap “Wander” to explore all the planet’s facilities such as the starport, market, information center, shipyard and mine plant.

What is Golden Route?

A Golden Route is a path indicating that if you buy specific goods from certain starport and sell it in another starport, you earn a decent sum of money. You can get the hint of golden routes from the “Golden Route” menu. Note that your desired goods may not be available if the level of the market is not high enough.

What if I cannot complete the mission?

If for some reason you cannot complete the current mission (e.g. not enough cargo hold to load the goods, or the opponent is too strong), you can abandon your mission without penalty. After abandoning a mission you can freely accept another mission. You can take the same mission again at any time later.

There are five types of ships that can carry weapons. Namely (from smallest to biggest) Frigate (FG), Destroyer (DS), Cruiser (CS), Battleship (BS) and Battlecruiser (BC). Bigger ships have higher Structure Point/SP and more equipment slots for mounting weapons, support devices or add-on parts.\nTransport Ships (TS) are a special ship type for loading a large amount of trading goods. They cannot be equipped with weapons.